Six months out from the planned move, the circle entered a phase of mindful and detailed preparation. Three potential housemates had been found (through word of mouth), the real estate approach and timing had been researched, a Lifestyle Assistant was in place, communication systems were up and running. Work on developing safeguards, a housemate agreement and Adam’s book continued. 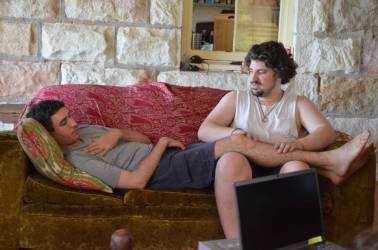 The focus now moved to preparing Adam and his housemates for the move. The goal was to continue to put pattern of support systems into practice while Adam is still living at home in order to build familiarity for him so that the transition into his own home is less jolting, and so that these systems could be tested and refined if needed. This would also give a sense of continuity.

Adam on holiday with his support team

It was recognised that the current team has a great relationship with Adam and with each other. One of the challenges for individualised support systems is how to keep the energy and momentum going in teams who have been with the person for a while. This process of developing an overarching pattern of support created the space for these discussions to take place and the opportunity for shifts and changes in people’s relationships with Adam.